This past Saturday, we woke up to a bright, sunny Autumn day.  I naively thought that I would have the day open to myself - probably catching up on a few chores and then just finish my book I had been working on for the past couple of weeks.  At 8:45 AM, the phone rang.  The hay was ready and would be here in 45 minutes... 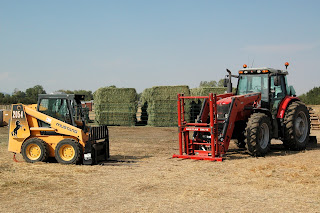 We put down our morning Jo and walked out to the hay yard.  There were about 100+ pallets in various stacks, as well as a large pile of curing compost on the south side of the fenced in yard.  We started in on the pallets, moving them out of the area, and then began shoveling the compost into nine gaylords (5' x 5' x 5' boxes), to store the compost for the next few weeks. 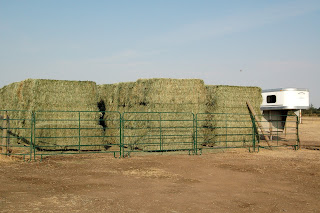 The farmer was right on time, bringing in twelve 1310 lb bales at a time.  With his large tractor, he easily stacked the bales in tidy rows as we tossed pallets underneath to keep the hay dry and off the ground.  Our tractor is maxed out at one bale alone.
When we were done, we had 50 tons of hay back on the property, ready for the inevitable winter months ahead. 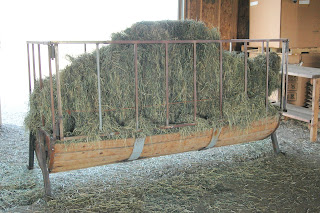 Back in the day, when we only needed twenty tons of hay, we used to pick bales out of the field, James and I taking turns tossing bales in the back of the truck and horse trailer.  Brutal work.  Then, we would break open a bale or two every morning and night, scattering the feed around the walls of the barn so all the alpacas would have access to the hay. 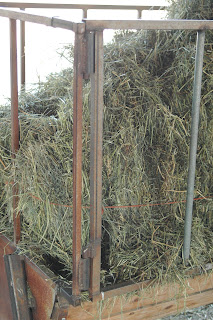 Over the years, our energy resources have dwindled, and thus we became smarter with our feeding.  We now use large feeders to set our large had bales in, feeding every 2 or so weeks depending on the weather.  Our skid steer / tractor picks the bales up with the forks or our new hay poker and gently sets them in the feeders.  On the feeders, which are approximately 9' x 4' x 4', one of the sides is hinged and is removable, enabling the entire half ton hay bale to be set into the feeder.  What used to take 5-6 hours of manual labor to feed now takes about 2 hours.  This also 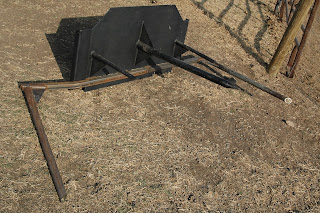 allows more feed to be accessible and thus edible, instead of sitting on the ground and being wasted.

Large bales are not for everyone, and they do take extra equipment to move.  However, they are so much easier to manage than smaller bales with less time in the snow and on the ground.  Plus you are not having to feed in the evenings or mornings because alpacas will not over eat.

You do not need an elaborate feeding system to feed alpacas. Even if you do not have feeders, we found one of the best, least expensive set-ups is to put hog wire around a pallet so the alpacas can pull the hay out while keeping the bale in tact as long as possible.  Instead of using a hay poker, we used to wrap the bale up in a large cinch strap and lift the bale up and place them in the barn, in a feeder, or on the stack of hay.  Any scraps and stems from the hay are given to our horses.  Thus, we are about 99% efficient on hay utilization.