What the Hay! - Alpacas of Montana

Figuring Out Your Alpaca Hay﻿
As Summer is rapidly turning into Autumn, our conversations with our hay farmer are increasing.  We purchase approximately 52 tons of hay each year between our alpacas and hay burning horses. To feed alpacas properly, you need to get them the right kind of hay with the right amount of protein.  Invest in good hay and you will save on medical bills, health issues for moms and babies and have comfortable alpacas throughout the winter.

So what is good hay? 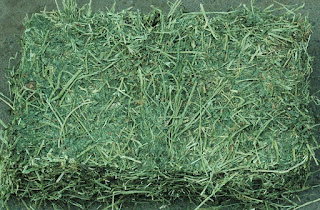 A rule of thumb is to look for hay that is 10-30-50.  This refers to hay that has approximately 10% CP (Crude Protein), an ADF (Acid Detergent Fiber) value less than 30% and NDF (Neutral Detergent Fiber) value that is less than 50%.
We purchase second cutting grass alfalfa with 10-14% protein with as few stems as possible.  Camelids can be finicky eaters.  They walk great distances in their native South American Altiplano and select the lush, succulent parts of the plants to consume.  Camelids preferentially select the most readily digestible part of the hay, often eating the leaves, flowers and seeds but leaving the stems.  Much like celery for us, it takes more energy to digest stems than nutrients they offer, so there is negative nutritional value for this part of the plant. The first year in owning alpacas, we wasted 4 tons of stems, not knowing alpacas would not eat tough stems. "If they get hungry enough, they'll eat it" does not work with alpacas. 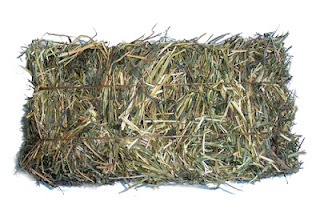 You Get What You Pay For
Another factor to consider is cost.  If you are paying premium prices for hay, you should demand premium hay.  Previously, we had a shipment of hay that had just arrived and was lush, green, fragrant and had a nice stem length.  As part of the farm's normal quality control, a core sample was done.  The hay had only 5% crude protein and 48% TDN.  Hay should have a minimum CP (Crude Protein) of 8% and TDN of 50% or more.  Just because it looks good does not mean it has the nutritional content the alpacas need.
Many people offer pellets as a supplement to their alpaca's nutritional needs.  When we were having difficulty keeping on weight with our alpacas years ago, we took several animals to the Colorado University
Veterinary program.  They found that the alpacas absorbed only 2-3% of the nutrients in the pellets we gave them. Because they are a new world camelid, they are not used to processed grains and could not absorb them.   The right grass / alfalfa hay mix is essential in putting 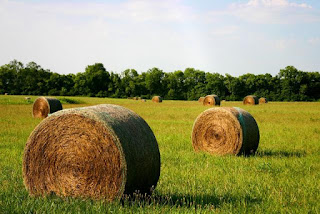 and keeping weight on an alpaca. We now give our alpacas pellets as treats when people come over, but not as a dietary supplement.
One argument I have heard is that alfalfa will blow out alpacas fleece.  This is only true if the alpaca gets fat. And that goes for any type of feed.  If the alpaca is overweight, you will likely have coarse fleece, no matter what the alpaca is eating.  Make sure you check your alpacas body score regularly.
Alpaca Research Articles Recommendations
Colorado State University Recommendations