The First Day of Shearing - Alpacas of Montana

The First Day of Shearing

The first day of shearing is almost always a little chaotic.  But this time, instead of starting tomorrow as we were scheduled, the shearers arrived in town early yesterday morning and asked if they could start.  I was in my sweat pants, drinking my morning Jo, getting ready to cross out the 17 items need to do in preparation for having four extra guys in the house as well as everything needed to be organized in the barn.


"Yes, of course you can come over!"  We ran out to the barn, removed the feeders, hay, straw, buckets inside and threw down the tarps, scrambling for stakes to hold them in place.  And then, they arrived.  Just like that, it was shearing time.

With a four man crew of shearers, the process began just like it had a thousand times before for them over the past three months.  James and I were running around, grabbing clear bags, markers, halters, and the four of them were in their routine of head holding, roping, toe trimming like they had for the past 12 weeks.  In between picking up fleece, I attempted to put up our skirting table with is a torture drill in itself, but eventually it was put together, either with the right posts or with enough banging with the hammer - or some combination of the two. 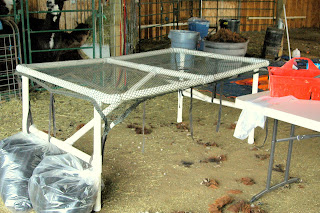 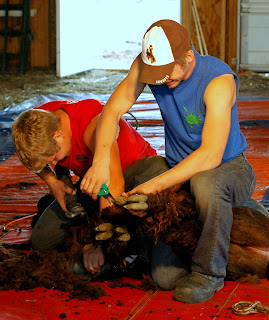 Then, the blue skies began to change to a purple gray.  We grabbed as many alpacas as we could and penned them in the barn.  The rest of the herds in the pastures bolted for the barns.  The booms of thunder blinked the lights and the barn grew darker, even with all of the lights on.  Heavy rains turned to hail and we all sat and watched the fluffy alpacas turned into drenched coats of fleece.  As long as the under blanket is dry, they can be shorn, but it is a lot more work to set out and dry wet, shorn fleeces than nice dry ones. 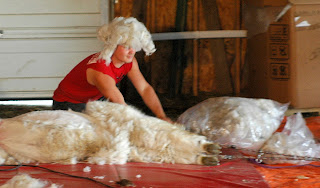 In 15 minutes it was over and the final number of alpacas to be shorn that day had been decided by the weather.  Whoever was dry, was shorn.  The rest were able to stay toasty in their coats for another day. 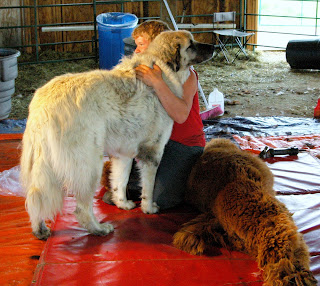