Showing Alpacas
The alpaca show scene
﻿ ﻿
Showing alpaca for ribbons at sanctioned alpaca shows has been growing significantly throughout the  for decades. These days you will see more alpaca at some shows than any other livestock category except horses.
There are well supported shows and those where numbers are lower as there are fewer local breeders. Numbers can be up to 3000 entrants but as low as 40. Class sizes vary from one alpaca through to over 30. Some large shows have to be tightly run to a schedule and things can be a bit pressured, and other shows are a nice relaxed day out. There is a show to suit most tastes.
Showing started in where the established, large and relatively informal shows are actually fiestas, lasting for many days and drawing in peasant breeders and larger station owners alike.
Showing then spread to the . There are well over 1,500 alpaca shows throughout the U.S. Locally, our YABA organization puts on smaller shows, mostly as exhibition shows for the surrounding area. Other larger shows, such as , and are much larger.
What happens at a show?
You have to get up at an ungodly hour and get to the show very early. It would be helpful if your alpacas had been sheltered that night and were looking clean and presentable. They need to be well halter trained, to walk around the show ring in front of the public, and quiet enough to allow judges to get hands on them.
Alpacas are shown in suri and huacaya classes, against each other in age, gender and color classes. The largest classes are usually the white juniors (6 to 12 months), where there can be 30 or more alpacas. 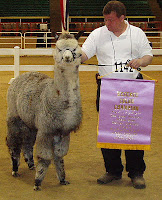 The Judge spends about 1 minute assessing each alpaca and then selects the best five or six who get compared to provide a winner. The winner goes on to the next round, where they compete to find a Champion, who gets a bigger ribbon. Champions compete until the judge decides on the best alpaca. This is the Color Champion.
Next week the same process is undertaken at a different Show. It is all judged "on the day", and given the show-to-show variations between judges, maybe that day it will be your alpaca that makes it to be champion.
How are alpaca judged?
Normally 60% of the marks are given for the quality of the fleece, 35% for the structure of the alpaca and 5% for presentation. Most alpacas are judged with their fleece on, but composite classes allow for the fleece and the shorn alpaca to be judged separately.

Alpacas are meant to be shown in "paddock condition" which minimizes preparation time and allows the judge to see the fleece as it would be shorn for commercial presentation.
One thing needs to be noted. Alpacas are judged based on their phenotype - how they look on that particular day. Their genotype is unknown to the Judge so genetic background is not considered. It also means that any knock on the leg in the float causing a limp will be judged as a fault, not an accident.
So whilst show ribbons are good for the trophy wall they should not be a breeding guide for serious breeders.
Why do people show their alpaca?
There are several reasons.
The enthusiastic chase for ribbons amongst the most competitive sees many hours of tiring travelling for alpaca and owner. However if alpaca shows were not also frequented by those who simply enjoy showing, shows throughout the world would not be, and would not remain, large, well supported events.  However, if you are looking for ribbons strictly for marketing purposes, you need to gauge that you will financially gain more out of the alpaca show(s) than the amount of time, money and effort put into the events.