Assessing alpaca fleece
Alpacas’ claim to fame is it is a softer as cashmere, warmer than wool, hypo-allergenic and water repellent. But, there is a surprisingly large variation of fleece quality between each alpaca, so you need to be able to differentiate what lives up to the previous statement, and which are far from this touting.
Fineness
In all commercial fiber processes it is largely the fineness that dictates the price. A micron is a measurement of length equal to one millionth of a meter and used to measure the width of a single alpaca fiber to determine its fineness / softness.  Most human hair is at least 100 microns, 5 times thicker than alpaca fiber. The lower the micron, the finer the fiber, the higher the price.

The finest animal fiber is the vicuna - the camelid from which the alpaca was domesticated - at about 12 micron. Alpaca range from 12 micron through to 40 micron.Dealing with micron that fine, it really has to be measured to get it right and measurement is done by various laboratories using a range of machines to produce a "histogram". 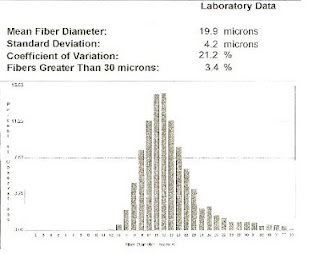 Graph - a histogram of an alpaca fleece sample
To analyze a micron test report alpaca histogram, find the Average or Mean Fiber Diameter (AFD) on the horizontal scale showing fiber diameter in microns. Standard Deviation is a term representing an average of individual deviations (plus or minus micron values) from the mean or AFD. The smaller the Standard Deviation, the more uniform the population of fibers measured. It is the most stable of variability measures and is used in the computation of other fiber statistics such as the Coefficient of Variation (CV).

A histogram will also tell you more about the fiber being measured - such as the uniformity of the fiber (SD standard deviation and CVD coefficient of variation - both the lower the better) and some specific calculated measurements such as CF (comfort factor - how much it does not prickle - 100% is best) and how the fiber reacts in a spinning situation (SF spin fineness).
The percentage of fiber greater than 30 microns is also included in the report. In commercial application and breed selection, this data is of interest because it shows the coarse edge that determines the final use of the fiber. It has a relationship to the strength of the yarn processed from the raw fiber and influences "prickle" factor, the scratchy quality associated with coarser fibers.

Histograms do provide scientific independent measured data about an alpaca fleece. A histogram is supposed to represent the fineness of the fleece, and the evenness of distribution of that fineness throughout the fleece. It is a snapshot in time, and can change considerably as the animal changes location and hence environment, grows older or eats different foods.
The histogram is produced by taking a sample of fiber from the mid-side of the alpaca. This location best represents the average micron of the fleece.
The machine will calculate the average of all the fibers measured (the "mean micron"). When alpaca owners quote a micron figure for an alpaca they usually quote this average.
Fiber Classification: 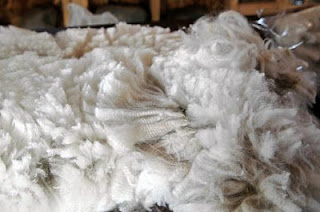 This is the amount of fleece you get off an alpaca, and it is usually expressed as an
annual adjusted weight, so you know how much fleece an alpaca grows a year. Annualized shear weight depends on a number of things - the speed of growth of fiber, the body area shorn, and the concentration of fibers in a particular area and the micron of those fibers. Alpacas are supposed to be a continuous growth animal, much like human hair, and do not shed their fiber. Thus, it must be shorn on a regular basis.
Shear weight is important, as the more you shear, the more you can sell. All alpacas are shorn so the shear weight statistic should be readily available.
Color
This is a matter of personal preference, however, with the odd exception; the lighter color alpacas have better developed fleece characteristics – crimp, volume, frequency with in the fiber structure.
Whatever color is chosen, the color should be uniform with no contamination of fiber with other colors (e.g. white fibers in a black fleece or dark fibers in a white one). The exception is grey fiber which is by definition a mixed color, with white, black, brown and various shades of grey often being present. 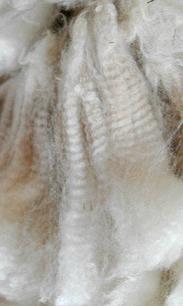 Crimp
Crimp is the corrugated effect of the fiber, seen when the fleece is opened. It is the most obvious aspect of the fleece and has a "wow" factor, so is emphasized by many breeders. In viewing a fleece, a crimp style can be indicative of other valuable characteristics such as fineness and density.
In reality crimp is viewed differently by processors - for some it adds value (loft for woolen garments for example), for others it is irrelevant, and if needed can be added in the processing. Thus, crimp is mainly bred for the show ring alpacas.
In alpaca there is a close correlation between fineness, curvature and crimps per inch (cpi). Higher curvature figures correlate positively to a higher number of crimps per inch, and negatively with fibre diameter (i.e. high curve and high cpi mean finer fibre.)
Uniformity of the fleece, the percentage of the total fleece that is usable in top grade production, changes considerably with age.
Guard Hair
Guard hair is a throw back gene from vicunas.  The hairs are straight and bristly and often over 30 microns.  They can create a scratchy feel in alpaca clothing if there are too many. While a majority of the alpaca blanket can be soft, crimpy and beautiful, guard hairs may be scatter throughout the blanket, neck, chest and belly.  If they are on the chest or neck, this is deemed acceptable, as the fleece will be in the secondary processing.  However, you should try and breed out this feature when picking an alpaca herdsire for future generations.