Eimeria Macusaniensis ( commonly called Emac ) is a type of coccidia seen only in alpacas. There are four types of coccidia seen in alpacas. Emac is rarely seen or identified and even in research very few cases are ever identified. Coccidia as a whole is a necessary part of life in any species, and exposure helps build tolerance and potential immunity.  Without this the animal will not survive, as coccidia is everywhere and so if an animal is never exposed to coccidia, they will have no immunity to fight it, because it is impossible that any animal will not be exposed to coccidia at any stage of life. For treatment, if there are less than 100 eggs on a slide, it does not need to be treated with Panacure (SafeGuard). However, Emac, which is type of coccidian, can be lethal and must be treated if you see just one egg. 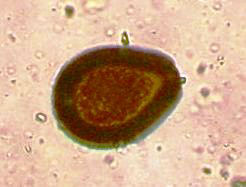 The normal cycle of coccidia is that in times of stress, such as transport, lactating females, weaning or a male just maturing, the body will throw out more oocysts in their feces. Once the oocycsts hit air, it takes 48 hours for the oocycst’s to sporulate and reproduce. Prior to the 48 hrs, it is not contagious. The only form of transmission is from contact with the sporulated species. Coccidia can be identified when performing random worm tests, however for the most accurate and likely identification, the sample must be prepared differently than normal screening tests. It must be tested in a sugar floatation method. It is essential to identify the type of Coccidia. Eimeria Macusaniensis (EM) compared to the normal coccidia normal is about 30 millimeters in width where the EM is 100 millimeter in length, and is dark and ugly, and also has four cells inside it). They also have thick oocyst walls (approximately 8-12 μm thick) and an obvious micropylar cap. Eimeria macusaniensis is considered by some to be highly pathogenic in alpacas. This coccidian may have the potential to cause death and disease in both young and adult camelids.
Animals are most susceptible to have bouts of coccidian in times of stress. Oftentimes an infected alpaca with any parasite will have loose stool, not pelletized feces. They also begin to loose weight and can become lethargic. The difficult part of finding Emac in the system is that just because you did not find an egg; it doesn’t mean it isn’t there. Eggs may slough the day before your sample, or the day after and is not consistent or predictable. For example, during an Australian research test, 20 samples were taking on a set of animals over 3 days. After taking 20 samples on each alpaca, they found some s 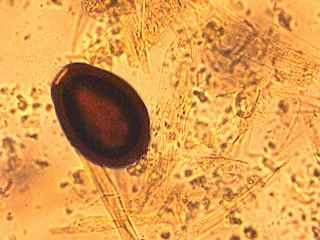 amples without oocysts on the first day, the next day there may be 5, and the next day none.
Treatment
Corid and Albon have variable effects on EMac and are not as consistent as Ponazuril in successful treatment. EMac can cyst in the intestinal tract and cause chronic protein loss, weight loss and lethargy. Rarely is diarrhea seen as with the other coccidian. Because the effects of Ponazuril on the developing fetus is unknown, it is recommended that females be at least 90 days out on their pregnancies and then treat THE ENTIRE GROUP for 3 days with Ponazuril and retest in 2 weeks.