Alpaca Dystocia and Post-Partum Care
As spring once again teases with beautiful skies and then cold, wet winds, we begin to think about the expectant dams on our farm. This year we will have 43 cria born on our farm. Statistically there will likely be some issues.
Gestation and Parturition
While ovulation occurs in both ovaries, nearly all alpaca fetuses occupy the left uterine horn. Embryos originating in the right side actually migrate to the left horn for attachment. The reason for the migration, unique to camelids, is unknown. The average length of gestation is 355 days. Fall babies tend to gestate fewer days, while Spring babies take a little longer in the womb on average. Ninety percent of all births for camelids occur during sunlight, the highest level occurring between 10 AM and 2 PM. Our latest birth was at 5 PM some years ago. Females starting the first stage of labor late in the afternoon should be watched carefully as this often results in dystocia.
Eutocia – The Good Kind of Delivery 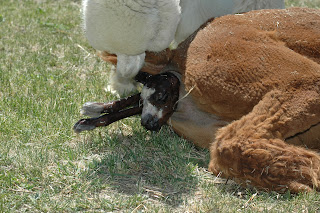 As in other species, parturition is segmented in 3 stages. The first state usually takes about 2 hours where there is restlessness, irritation, biting at the side, laying down and getting up, frequent trips to the dung pile without going to the bathroom.
The second phase usually lasts about 30-45 minutes. This is where the dam is in full contractions and pushing occurs. Body parts – the head and legs – as well as the amniotic fluid appear. Once this stage starts, the baby should be out within 45 minutes. Cria bodies are long and slender, helping to minimize dystocia. The normal presentation is anterior in a dorso- sacral position with extended limbs (legs and head first, superman style). Females will alternate between standing and sitting and finally the baby is delivered in either position. Crias are born with a thin epidermal membrane to help ease in the birth process. 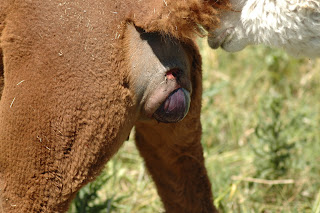 The third stage of labor is the delivery of the placenta. Usually this happens within 4-6 hours. After the baby delivery, the uterus begins to contract again until the placenta is released. New mothers are noticeably more comfortable once the placenta has passed. Retained placentas are uncommon, though we have had one. If is not passed in 24 hours, oxytocin may be given IM. Strenuous contractions may result a uterine prolapse.
Dystocia – The Bad Kind of Delivery
Dystocia is no more common in camelids that in other domestic species. Uterine torsion, breech or posterior presentation, and abnormalities of posture constitute most of the causes of dystocia. Sedation is rare and often the female will lay down when issues begin to arise. Tail wrapping is recommended and cleanliness of both the dam and veterinarian is imperative. Abundant lubrication is important. Damage to the cervix and vagina is a major cause of infertility subsequent to dystocia. There are general rules to follow when manipulating the baby in order for delivery to be possible. Pushing back the head is often useful in helping to allow sufficient space to reposition an abnormal posture. If you see or feel the tail first, the baby is breech. Call the vet immediately. If a vet is not an option and you need to do it yourself, it is important to have adequate dilation of the birth canal before delivery is attempted. Due to the comparative small size of the fetus and ease of pushing the head back, extending the rear legs is usually accomplished with relative ease.
Uterine prolapse is relatively uncommon, though we have had it on our farm. This causes a higher risk after dystocia. As in other species, a uterine prolapse is an emergency and correction requires epidural anesthesia near the tail or the posterior end of the body and perhaps light sedation. Extending the dam’s rear legs caudally will aid in replacing the uterus. After cleansing the exposed uterus, a shoe-lace pattern or a purse string suture may be used in the vulva to prevent re-prolapse. Usually the stitches will remain for several days for healing.
Uterine torsions are relatively common in alpacas, though many causes are unknown. Most torsions occur during the last month of gestation, by may occur as early as 7 to 9 months. Behavior signs of a uterine torsion are often confused with that of gastro-intestinal disorders – severe pain, violent rolling, restlessness. The diagnosis can be made by rectal or vaginal palpation. Putting one or two fingers in vaginally, if you hit an immediate wall that feels a bit twisted, the uterus is twisted. Torsions can be cranial or caudal to the cervix and palpation will reveal a spiraling feel (twisted). Most torsions (95%) are clockwise (viewed from the rear). With sedation, correction can be attempted by rolling the dam in the direction of the torsion while attempting to trap the uterus within the abdomen by applying direct pressure to the abdomen. If this does not correct the problem within 10-15 minutes, surgical ventral celiotomy should be performed. If the cervix is open the fetus may be delivered vaginally.
After the birth 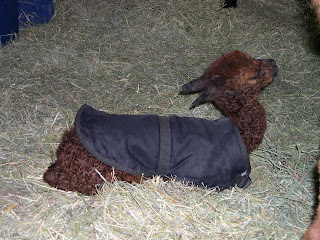 While it is not necessary, you can remove the epidermal membrane on the baby with a towel and vigorous rubbing. We find this stimulus gives the baby its first little jolt of life and the blood pumping. The cria should at least try to stand within 15-30 minutes and attempt to nurse within 2 hours. Often the baby will start trying to suckle on the check and under the front armpit, which is fine. Eventually they will move back to the udder and you can help them find their way a bit, too. Signs of prematurity include weak flexor tendons (baby’s feet are floppy), ears that are not erect, incisor teeth that have not yet erupted and delayed nursing. Normal birth weights will range from 12 to 20 lbs. We had 4 last summer that were over 25 lbs. It is not unusual for alpaca crias to loose a quarter to a half a pound in the first 24 hours of life. After 24 hours, crias should increase weight by the same amount daily. Most crias will double their birth weight by one month of age. Body temperature of the cria should be 100 F to 102F for the first two weeks, then 99 F to 101F. The heart rate varies from 60 to 90 beats per minute and the respiratory rate from 10 to 30 breaths per minute.
Failure of Passive Transfer
Early and frequent nursing is desire as no passage of antibodies to create the immune system occurs across the placenta. Colostrum from the mother must take place within 24 hours of birth. Causes of failure of passive transfer (FPT) include lack of intake, poor production by the dm, or failure of absorption from the crias’s intestinal tract. Immunoglobulin levels should be determined at 24 to 36 hours of age using alpaca specific assay kits. Do not use the kit if the cria has been supplemented with colostrum of cows, goats or other species. If cow or goat colostrum has been given, a sodium sulfite turbidity test can be used.
If FPT has occurred, plasma transfusions may be given either intravenously or interaperitoneally. Llama plasma is commercially available or can be obtained from other animals on the farm. The introduction of a catheter into a peritoneal cavity is a rapid and relatively stress-free procedure. Warmed plasma (350 to 500 ml) may be given over a period of 10 to 15 minutes intraperitoneally or over 2 to 4 hours given intravenously.
Cow or goat colostrum is an acceptable substitute if alpaca colostrum is not available. As a general rule, the cria should have at least 10% of its body weight in colostrum in the first 24 hours, preferably in small, frequent volumes (such as 150 ml every 3 hours). If continued supplemental feeding is needed, whole cow’s milk with yougurt (30 ml of plain yogurt per 500 ml of milk) may be used, or goal or goat milk replacer.