A Mink on the Counter - Alpacas of Montana

A Mink on the Counter

Although most of my writings are dedicated to alpaca care taking and husbandry, I thought our brief encounter last night with the wilds of Montana is worth a quick note.

Sitting at the neighbor's house enjoying coffee, we heard a high pitched shrill and dogs barking, their nails frantically clicking the pavement in pursuit of their prey.  Our neighbor opened the door to barking as a relatively large brown flash scurried by his feet, the dogs legs not quite as gracefully bounding through the doorway. As one person grabbed the dogs, the rest of us ran to the couch so see who else had entered the house. 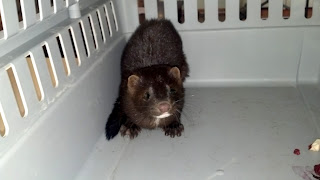 With eyes glowing in panic, a furry little face peered out at us from the innermost depths of the sofa.  With cat carrier in hand, we quietly flailed about, trying to get the frightening mound of fur into the uninviting carrier.
Eventually, we succeed, all of us a little worse for wear.  The poor little guy had saliva along its back, indicating that it had been in at least one of the dog's unforgiving mouths at one point.  We jumped in the car and brought the cage home.  There, we set the mink on the counter. 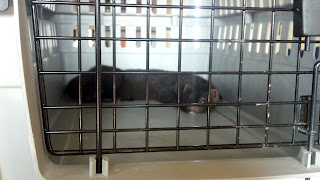 We looked at him through the grate and he looked back. The cat was less than impressed and glared down from the top of the stairwell.  Balled up in a corner, it was hard to tell his size.  We decided to just let him be for an hour and let him catch his breath.  After his body seemed to relax a bit, we cautiously dropped in some raw hamburger.  Nope.  Grapes?  No way.  Then came the raw chicken.  At last, the insults were over.  He ate and ate. At first he hissed when the food was dropped.  By the end of an hour, he pulled the meat out of our hands (through the grate). 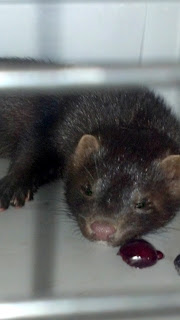 As his eating slowed and after a few long drinks of water, he stretched out to the length of the cage.  His belly fully, his eyes began to roll back in his head.  He would try to stay awake, only to yawn and close his eyes once again.
His body was about 18" long not including the tail.  Dark chocolate in color, he had a beautiful shiny glow to him.  As he yawned, we could see his white baby teeth - little fangs and molars.  As he began to get more comfortable with us, his little feet began to twitch during his sleep and he eventually rolled over on his back showing a broken line of white starting on his chin and throughout his belly area.  We put him in the bathroom to keep the cat from teaching him a lesson in the middle of the night. 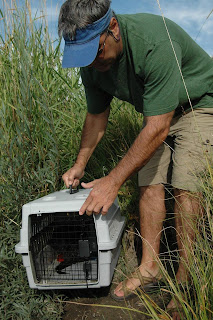 The next day, he was ready to go with energy.  James took him to a remote stream, far away from roads, dogs and people.  As James approached the water, the little mink became super excited and within minutes he was on to his new home. 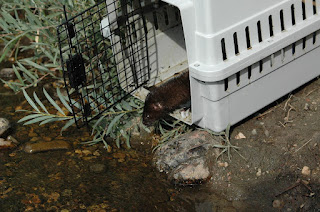 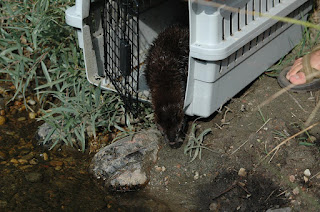 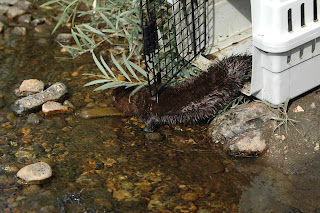 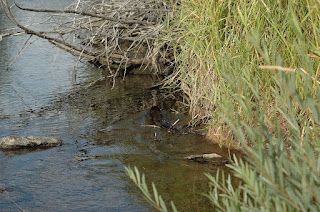