Generally, alpacas are born between 10 AM and 2 PM. Nearly 8 years ago and 21 babies in, LeRoy Brown was born... at 4:30 PM and one month early. LeRoy was born a wapping 7 pounds and followed a normal birth that yielded a 26 pound baby. When cria (alpaca babies) are born outside of the 10-2 timeframe something is often gravely wrong. Often they end up having bent ears, teeth that haven’t come in and/or loose feet tendons. LeRoy was born with some clown feet, but no other visible ailments. 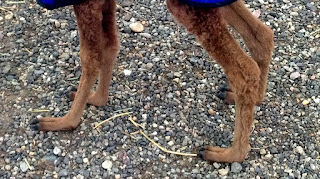 As all parents do, James and Sarah made some big mistakes. But as with anything, learning from our mistakes is imperative. And the only way we, and others, can learn is by being honest when we mess up, so here’s an honest account of everything that went wrong with LeRoy Brown’s birth-day.


Just like all mammals, alpacas are born wet and slimy. They need to be toweled off and kept warm upon birth. LeRoy was born at a startling seven pounds and unexpectedly, so James and Sarah were acting fast. This led them to dry him off with the same towels they had used several hours before during the planned births--confusing the scents of the babies. AKA, LeRoy’s mom had no idea which baby was LeRoy. As a first time mom, she was confused and ended up running over to attend another baby, leaving hers alone.


In order to try and show LeRoy’s mom which baby was hers, James and Sarah removed the other baby from the area, so she would attend to LeRoy and not the healthy baby, which only went on to cause complete havoc. The mom thought they had just taken her baby from her and ran around as though the world was ending.

Eventually, LeRoy’s mom realized that she was supposed to take care of him and calmed down a bit. After a while, LeRoy was doing his best to stand and walk around, but tottered like a sailor drunk at sea. He seemed chipper and full of energy, despite his wavering attempts, so James and Sarah retreated to the house for a break. When they returned, LeRoy was limp in the pasture. Due to his premature nature, he didn’t have the strength to nurse. James and Sarah assisted the mom and baby into the barn and milked LeRoy’s mom, so he could have his first feeding. He immediately perked up. Aside from a mother’s milk, goat milk is the next best thing for baby alpacas, so James and Sarah thawed some frozen goat milk and fed LeRoy until he was spry and feeling better.

Due to it being a summer night and in the 50s, James and Sarah didn’t put a blanket on baby LeRoy during the night. When they went to check on him at 2:00 in the morning, LeRoy was lying alone in the corner of the barn with no mother in sight. Baby alpacas usually have a temperature between 100 F and 102 F, but poor little LeRoy’s was at 99.5 F, so James and Sarah laid him on a heating pad and fed him some additional warm goat milk. This allowed him to snuggle in and sleep for a while.

Where was LeRoy’s mom? Well, the barn door blew open in the wind and so she was outside in the pasture. James and Sarah brought her in from the pasture and she was in a full panic from not knowing where her baby was or how he was doing.

Sarah spent the rest of the night in the barn with LeRoy, trying to keep him comfortable and safe. Premature babies have a lot of trouble regulating their body temperature, so she spent hours upon hours adjusting the heating pad to fit the newborn baby’s needs. LeRoy would occasionally stand up steadily and look full of life and energy just to take a few steps, drop his head and tip over, literally falling asleep standing up. Sarah would catch him before he hit the ground, but had to keep a very watchful and attentive eye on him all night long. Premature babies sleep and sleep and sleep, so there was a lot of sleep monitoring and feeding when necessary. They fed the baby 60 ccs of goat milk every 2 hours or so, unless he was able to nurse from his mom, who was sort of a basket case. Whenever another baby would come by, she would call out to it as though it were her own, just to realize hers was next to her. Alpacas are very social herd animals, so James and Sarah could tell she wanted to be back with her herd, but couldn’t given her newborn and her confusion as to which baby was her baby. 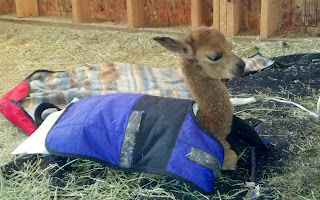 The following day was a sunny 75 degree Montana summer day. When LeRoy went out into the sun, his temperature rose to nearly 104 F within 10 minutes, so James and Sarah brought him back into the barn and cooled him off with water, which dropped his temperature below 100 F again. It’s really important to monitor baby alpaca’s body temperatures, especially premature babies, since it is so hard for them to regulate their heat.

Even after assisting in hundreds of alpaca births, mistakes were made with LeRoy. We all have to be constantly learning and willing to keep trying. LeRoy is now a big and healthy guy living out his life on the farm. He took a hiatus from living with Alpacas of Montana when he was sold with 12 other boys to a ranch in Whitehall, Montana, where he had nearly 1,000 acres of open land and a large group of guard llamas. The owners of that farm ended up leaving, so James and Sarah bought him back and brought him back home, where he is living out the rest of his life as a safe, healthy and happy alpaca.