Into The Woods - Tobacco Root Mountains of Montana - Alpacas of Montana

Into The Woods - Tobacco Root Mountains of Montana

Summers in Montana are so short. Most of us plow through the cold season for the reward of a Rocky Mountain Summer – the smell of lilacs and cut grass, amazingly sunny blue skies and outdoor adventures.

Years ago in our high school and college days, my sister Jessica and I used to camp quite a bit throughout the various mountain ranges around Bozeman, Montana. We would hike in, set up an on-a-budget camp with a tarp and old backpack and enjoy a couple of days in the woods.
Nearly 20 years later, we decided to venture out again. But this time, we were going to bring her 2 eight-year-olds and a six-year-old kids. A slight but fun twist.
Since was early in June, many higher mountain areas are still snow packed, so our options were slightly limited – we wanted a 2-3 day hike, not too steep, scenery is optional. A friend suggested the Tobacco Root Mountains. We negotiated and rescheduled our calendars and finally committed to several days into the woods.
We packed – and packed – and were finally in the car ready to roll. After an hour and a half drive with a “progressively worsening” road, we made it to the trailhead. The sign stated “Louise Lake: 3 miles”. But, then 3 milespart was scratched out and “14 miles” was written in. We were already committed to the trail, so we decided to go for it and see where it took us. If it was getting to be too long, we would just stop and camp.
Usually, we are quite efficient and light campers. However, 2 adults were carrying enough for 5 people to eat for 3 days, 4 sleeping bags and one TWO MAN tent (there are photos to prove that we all fit!). With each pack over 60 pounds, we headed up the trail, crossing creeks and winding our way through the woods. At 3.5 miles, we started to get nervous. We needed to detour off of the trail because it was snow covered. This trail is primarily switchbacks on the side of a mountain in steep terrain, so there were no opportunities to set up camp. At 4 miles we were getting not sure what to do. The twins ran head and around each corner would get excited, but the trail would continue on. 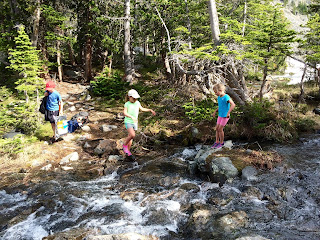 Then, at 4.5 miles Gracie screamed that she saw the lake. Her brother Bryce took off to make sure it was true. Jessica and I were at a breaking point with our backs, but we slowly made it.
What an amazing reward for all of our walking and working up the hill. The setting of Lake Louise is amazing.
Our campsite was ready to go, with not a single person seen on the trail or at the lake. We settled in the cirque with the massive, 10,353 Middle Mountain to the south. The fire was started, tent put up and it started to rain. There were bursts of rain here and there, but our fire persisted through it. We had seen bear warning signs on the way up, and we hung a rope to tie up our food. The first night we heard crackling and splashing in the lake, near the tent, but the critter never came closer. 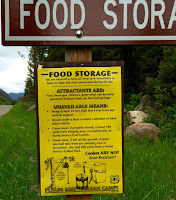 The next day we awoke with sunrise, stoking the fire, drying out our sleeping bags and picking up the camp. Eventually, we decided to go for a walk around the lake. Much of the perimeter is made up of landslides, so we jumped rocks and negotiated boulders, working our way around pine trees and post-holing though snow. On the opposite side of our camp, we stopped for lunch and enjoyed the alternate view of this crystal-clear lake. We continued on, exploring the sides of the mountain until we finally reached our base once more. It was 11:30 am. Uh oh…now what?
Time is a funny thing when you are not hooked up to wi-fi, cell service or your calendar of events that need to be completed each and every day. Bryce fished for lake trout; we made up a couple of games, read a book and just relaxed. All of the kids- who live in the city but definitely know how to self-entertain – said it was a great time. Not one of the three had a single complaint or whined during any of the 3 days we were on the mountain. We munched and ate our way through much of the days and had a pea size hail storm we avoided under the trees. The kids made inventions and games and we just enjoyed downtime from the real world and ourselves.
Finally, it was time to go. We sang songs on the walkie-talkies and knew we had a far too infrequent experience of getting away for a while. Hopefully it will not take another 20 years to have such a great time again. 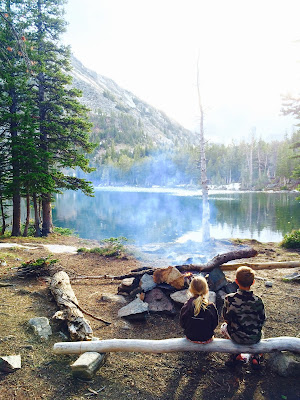