After two years of exploring other trails' mountain tops, my sister, her three kids and I decided to once again hike to Lake Louise in the Bitterroot Mountains. Getting a bit of a late start, we arrived at the trailhead around 3:30.   Previously we had hiked and camped in June, which is early for this trail because the snow has not fully melted. We did not see a single other person for three days. This time, it was the beginning of August and we knew there would be more competition for the limited amount of campsites because of the additional hikers and campers during this trek. This was indeed the case where seven other vehicles were also in the parking lot. 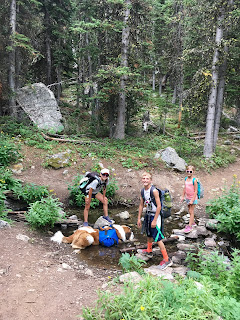 Like a well practiced NASCAR team, we jumped out of our vehicle, doused excessive amounts of bug spray and sunscreen on our bodies, strapped on our packs (including the now 18 month old St.Bernard Cali) and were walking within eight minutes of putting the vehicle in park. We could hear distant voices behind us as we headed up the trail and we rambled up the mountain as quickly as possible. But inevitably, a couple of groups passed us over the several hour journey. 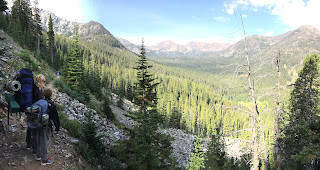 4 1/2 miles later, we reached the summit and started looking around for a campsite at 6:30 in the evening. We assumed our favorite one was taken as five other people stood around the rock firering we pined after.  We came in a bit close and put down our packs. Generously , this group offered us the campsite, apparently seeing the disappointment on our face with their presence and said they would take another site across the lake. We thanked them and did a little happy dance. 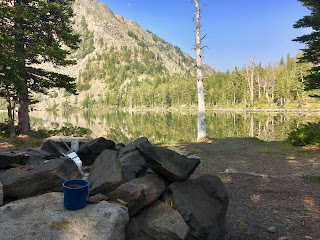 Looking out, it was smoky and the colors had significantly dulled compared to my memories several years before. We cooked dinner, set up our tent and crawled in for the evening.  In the morning the smoke had cleared. With the sun rising in the background, all the glory of the area with the emerald green color of the lake and sounds of the morning birds woke us to an amazingly Montana mountain day.

We took our time walking around the lake, hopping boulders and sliding down a small snow glacier. Two of the kiddos even jumped in the lake for the promise of three Smore's each as a reward that night.

The next morning, we packed up and once again headed down the mountain. We will be back again in a couple years to see the continuous and holding beauty of Lake Louise in the Bitterroot Mountains of Montana. 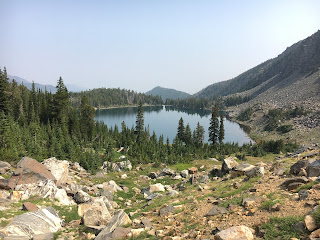