Pregnancy testing alpacas
Alpacas are induced ovulators, meaning they can be bred anytime of year without having a specific season heat cycle like most other mammals. This creates a high probability that alpacas become pregnant one of the first breedings. This write-up goes over how you check.
There are a number of reasons why alpacas do not conceive or slip their pregnancy in the early days after conception. Corrective action can be taken in these circumstances, but first you need to know that the re-absorption has happened.
The Spit Test

We found the “spit test” to be one of the quickest and easiest ways to tell if a female alpaca is pregnant. Especially for experienced dam alpacas, they usually know within 4 days of breeding if they are pregnant. A maiden (first time mother) is harder to tell because they have not had this experience before and may lie down even if they are pregnant. The Spit Test is easy as long as you have an enthusiastic male alpaca.  We do not recommend testing with your breeding males too often because continuous rejection will decrease they desire to breed. The first step is to bring the pair together and once the male starts humming, if the female jumps around, spits and/or kicks, she is pregnant. If she holds still, starts sucking her lips and/or lies down, she is ready to breed again because she is not pregnant.
Once a female alpaca is pregnant, she refuses the male, and continues to do so through the entire 11 ½  months of pregnancy. She runs away from the male, with her ears back, and prepares to spit at him to drive him off - hence the name "spit-off".
I would suggest testing periodically about every 2 weeks for 4-6 weeks.

Ultrasound pregnancy test
The results from an ultrasound scan pregnancy test depend largely upon the skill and experience of the operator and the quality of the machine used. However, the best can see pregnancies and fetal development 20 days post mating. A pregnant scan shows a dark area, which is the fluid-filled uterus, and the cria is seen as a brighter area inside this.
You can do scans yourself if you invest in the machinery, your vet can do them, and in some areas mobile sheep scanners can scan your alpacas for you. 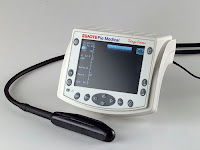 Rectal scans are effective in picking early stages of pregnancy. Rectal scanning is also used to investigate the state of the uterus and ovaries.
Exterior abdominal scans are effective from day 40 of pregnancy. We normally do an exterior scan do of the females at 90 days of pregnancy because if we see a pregnancy then, it is likely to be retained for full-term.
Blood pregnancy test
Blood tests can be done to test for progesterone levels - which indicate pregnancy. These tests are around 5 dollars and we found to be fairly accurate. By drawing a small vile of blood and sending it into a laboratory such as M & M Laboratories, you can usually tell if an alpaca is pregnant within 20 to 60 days.
It is important that the labs/vet tell you the actual progesterone level (a number) and not just "pregnant/not pregnant".
A word to the wise
With experience and with knowledge of the individual behavior patterns of your alpacas, you can actually look at alpacas and tell whether they are pregnant or not. Just like in humans, hormonal changes create behavioral changes. So a sweet friendly alpaca can become a grumpy one once she is pregnant, which is a mixed blessing. Maiden alpacas – first time moms– often can have a rather pronounced mood change. If you know your alpacas’ personalities well, this can help you determine if she has conceived.
Note that between 15% - 18% of alpaca pregnancies do slip  - or miscarry - in the first 90 days, so be vigilant. Testing for pregnancy at the appropriate times will save you waiting and watching your prize female for 12 or 13 months and wondering why she is not producing the eagerly awaited cria.
Support Alpacas of Montana by sharing our articles and shopping our products!