Predator Protection
Although the U.S. Department of Agriculture’s National Agriculture Statistics Service (NASS) doesn’t track the number of alpacas and llamas that die each year, it does keep track of how many sheep and goats die and the causes of death. The agency periodically publishes findings in a report titled Sheep and Goats Death Loss. According to the May 6, 2005, edition, predators killed 155,000 goats during 2004, accounting for slightly more than 37% of all goats that died in the U.S. that year. Sheep figures are just as astounding: predators killed 225,000 sheep during 2004 (also totaling 37% of total losses). Small ruminants (sheep and goats combined) were killed mainly by coyotes (60%), dogs, mountain lions, bears, foxes, eagles, bobcats, and other species – such as wolves, ravens and black vultures. Keeping in mind that alpacas, adults and crias alike, are the same size or smaller than most goats and sheep, you’ll agree that predation is a potentially serious problem, even in relatively populated areas, where free-roaming dog predation poses a major risk.
To protect your herd, you should:
Llamas as Guardians 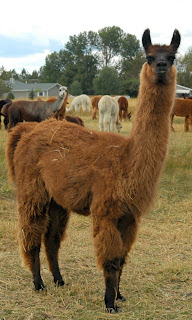 In certain situations, llamas themselves make outstanding herd guardians, but only in low risk locales. A llama (or even several llamas) can’t effectively repel aggressive packs of dogs or coyotes, much less the big predators, such as mountain lions and bears. In high-risk situations, guardian llamas are often maimed or killed while attempting to protect their charges. We have two llamas in with our female and weanling herds.
Donkeys as Guardians
Some farmers prefer donkey guardians. Donkeys require no specialized training. And, as they instinctually dislike the canine clan, most will attack dogs and coyotes tooth and hoof. Since donkeys have keen hearing and good eyesight, dogs and coyotes rarely sneak past a donkey standing guard.
Guardian donkeys must be standard “burro” size or larger; miniature donkeys require guardians of their own. Jennies (females) work best. Geldings work well, too, but never keep a jack (intact male) with your llamas or alpacas, as they can be aggressive toward herd mates they dislike and have been known to kill newborn crias. And not all donkeys are interested in bonding with another species, especially when other equines are within sight and smell. 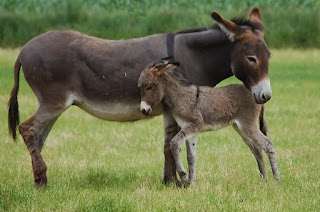 That said, in one survey (reported in the Colorado State University publication Livestock Dogs, Llamas and Donkeys), 59% of Texas producers who use guardian donkeys rated them good or fair for deterring coyote predation and other 20% excellent or good; and 9% of the sheep and goat producers polled for the 2004 National Agriculture Statistics Serve survey successfully keep guardian donkeys, too.
Dogs as Guardians
For many thousands of years, European, Middle Eastern and Asian guard dogs of dozens of types and breeds have protected herds of goats and flocks of sheep from predation by wolves, bears, jackals, and human thieves. Eventually, some of those breeds were brought to . 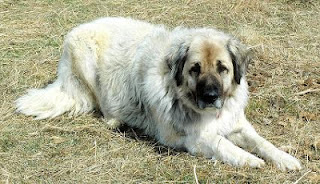 According to Agriculture Statistics Service figures, nearly 32% of American sheep and goat producers use livestock guardian dogs. Because they’ve been bred to be guardians for thousands of years, when bonded with a herd from puppyhood on, livestock guardian dogs require little or no specialized training. Once bonded with animals to be protected, a guardian dog willingly stays with them and fearlessly protects them twenty-four hours a day. Several major livestock guardian breeds, especially Great Pyrenees and Anatolian Shepherds, are readily available throughout at reasonable prices. We have had 4 Anatolians over the years, shipping them across country as puppies to protect our herd.  We cannot say enough good things about Anatolians (also called Kangals or Akbash).
There is one major drawback: livestock guardians tend to catnap throughout the day and bark throughout much of the night, because that’s when predators are most active. This effectively warns most predators away but sometimes causes problems with light sleepers and unsympathetic nearby neighbors. Over 8 years, we have not had a problem with our neighbors, but be sure to keep an open relationship so that they let you know if there is a problem ahead of time. In addition, one dog can’t effectively protect livestock from attacks by large packs of dogs or coyotes nor from predators such as mountain lions. Because we live in a mountainous area, we opted to utilize Turkish Anatolians, as they are one of the only breeds that can athletically fight a mountain lion. Our female, Cookie, has taken on 4 over the years. A pair of Anatolians can take on 1,000 acres effectively. Where heavy-duty predators are the norm, a pair or trio of dogs works best – one to herd your alpacas to safety while the others deal with the invaders themselves.
A word to prospective purchasers: DO YOUR HOMEWORK! Read. Visit other farms. Buy from responsible livestock guardian dog breeders. Show dogs have been selected for beauty and gait, not guardian ability. Stick with proven adults or puppies from working farms.