Shearing Alpacas
Even though we shear every year for almost a decade now, I can feel my anxiety growing about 2 weeks before the first alpaca lays down to be shorn.  Its a simple process, really, and my anxiety lies not in the shearer himself, but everything I need to do make it simple, smooth and efficient without anyone being hurt.
So, "How do you shear alpacas?" 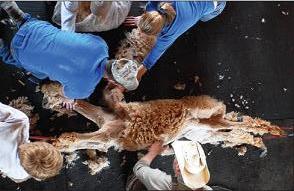 Alpacas are too big to tuck between your legs and shear like you do a sheep. Usually they are shorn lying down, either on the ground in the paddock, on a shearing table in the shearing shed or on the floor. Ideally you need a team of at least three people to shear alpacas - one to hold, one to shear, and one to collect the fleece as it rolls off. 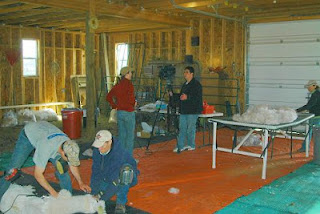 It is possible to shear alpacas standing up. This requires a minimum of two people - one to hold the alpaca and one to shear the fleece, which then falls to the ground.  However, we feel the alpacas are more secure if tied down for the several minutes need to take off their coats.
Alpacas are shorn once a year, and their soft luxurious fleece is usually called "fiber" to distinguish it from sheep wool, which has a different structure and without lanolin.
Preparation for shearing starts with the alpacas being put in a clean paddock, which has no hay to roll in, or plant or tree seeds that can stick in their coats. Alpacas love rolling and dust-bathing, and their fleece picks up dust, dirt and vegetation matter.  Much of this will fall off when it is "skirted" (cleaned on a mesh table) as well as during processing into yarn. 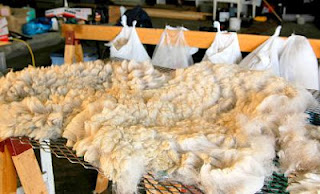 We take a sample of the fiber for micron testing from the mid-side (the middle of the sideof the alpaca) as this place represents their average micron. Fiber higher up on the body in finer and lower dwon ont he body is stronger and higher in micron.
Our alpacas are sorted into groups by color, as they come in white, fawn, brown, black and grey, and many shades in between. We shear one color at a time to avoid color contamination in the shorn fleeces.


We shear on the floor of our barn, on top of livestock floor mats. The alpaca is up-ended and stretched out, and its feet are restrained, usually by ropes. The head of the alpaca is held by hand, and once stretched out like this the alpaca tends to stay still. Some do complain vocally, and some will spit. But then, wouldn't you?
Alpaca shearers use a 13 tooth electric shearing hand piece, but run it at a slower speed. Alpaca fleece is not as greasy as sheep's wool, and the hand piece can tend to heat up. A small amount of oil may be used to lubricate the hand piece. One side is shorn at a time. The alpaca is turned over to do the other side.
Alpacas shear between 5 to 8 lbs of fleece annually, with some of our larger males offering up 10 lbs.  The fiber is usually 3" to 5" which is long enough for processing. 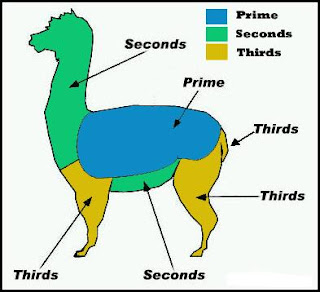 The fleece is gathered up once it is shorn off. The main fleece, called the blanket, is the finest. The fleece from the neck is equally as fine, but often it is shorter, so it is collected separately. The fleece from the legs and the lower part of the alpaca is not as fine, and it is put in a separate bag. After shearing our shearing shed is full of bags of shorn fleece, waiting for classing and processing. 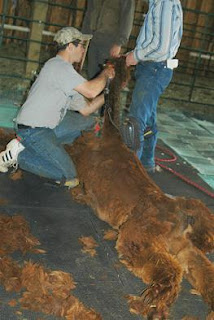 Shearing time offers an opportunity to clip toenails and do inoculations, while the alpaca is still restrained. Wait until the fleece is shorn off and picked up before doing this, so you do not get toenails into the fleece.
Once shorn, the alpaca is sat up, its head is pointed towards the freedom of the paddock, and it wastes no time getting up and walking away. Shorn alpacas look much taller and thinner with their coats off, and their necks look very long.  With 189 alpacas on the fields, we say we gain about 2 acres of space when they are all shorn.
They feel the cold initially, as it takes about three days before their skin thickens up and protects them from the weather. After shearing, make sure your alpacas have shelter from the weather.