Llamas and Alpacas on the Farm

By Lance Gegner and Updated by Hannah Sharp
Llamas or alpacas can be a good addition to a farm or ranch—an alternative livestock enterprise on marginal pastureland that fits well into a diversified farming operation. This publication discusses considerations for raising llamas and alpacas, including regulations, marketing, nutrition, care, reproduction, and handling. 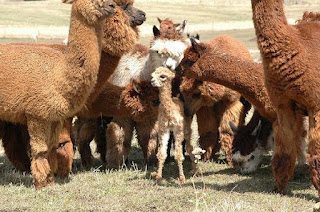 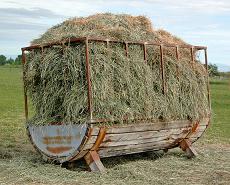 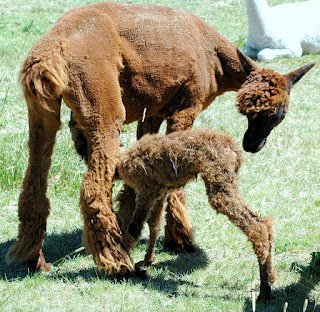 Llamas and alpacas are induced ovulators, meaning mating precedes the egg, not the other way around. The animals mate lying down, for an extended period of 15 to 45 minutes. The female should be tested for pregnancy at two to three weeks, six weeks, and 12 weeks after mating. It is not recommended to leave the male and female together at all times.
Baby llamas and alpacas, or crias, weigh 12 to 17 pounds (5.5 to 8 kilograms) and 24 to 35 pounds (11 to 16 kilograms), respectively (Merck & Co. Inc., 2011). Crias should remain with their mother until at least four months of age, though being together for six months is recommended to promote normal behavior and good nutrition (Camelid Community, 2005). Generally speak- ing, crias need very little human care or main- tenance to thrive. The most important human intervention consists of keeping a careful watch at birthing, treating the umbilical cord with iodine compound, and ensuring that the cria’s airways are clear. After birth, make sure the cria gets enough colostrum in the first two days, and an adequate milk supply in the following weeks. (Watt, no date). Do not bottle feed crias unless medically necessary, and then only in a herd environment (Camelid Community, 2005).
Handling and Transport
Proper handling of llamas and alpacas is necessary for the safety of both the animals and people. When using halters, they should be fitted such that the nosepiece allows room for chewing but cannot slide down and hinder breathing. Improperly fitted halters can be fatal. The nose bands of properly fitted halters should sit just below the animal’s eyes, and the head band should sit right at the base of the ears (McGee, no date). Be careful not to leave halters on all the time, and don’t tie animals to any stationary object, such as a tree or post. Llamas and alpacas can break their necks trying to get away or by jerking their heads. If you have to tie the animal up and leave it unattended, always use a bungee or other elastic extension (McGrath, 1996). Handlers should also avoid wrapping a lead rope around their hand or body, as serious injury could result if the animal takes flight. 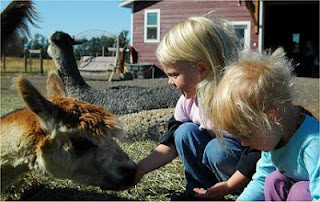 For contact with the public, only use llamas and alpacas that are accustomed to and behave appropriately with people. Spitting is part of the body language of llamas and alpacas and is used to express displeasure, establish the social order of the herd, and respond to threats. Llamas and alpacas accustomed to people will generally not spit at humans (Camelid Community, 2005).
Llamas and alpacas are easy to train. To reduce stress during transportation, llamas and alpacas should be trained to halter, lead, and load into a transport vehicle. In just a few training sessions, llamas can learn to pull a cart or carry a pack, a lightweight rider, or golf bags. (Note that alpacas should not be used for carrying riders or packing as they lack the skeletal structure for these activities) (Berman, 2011).
For herd management purposes, including training, llama brushing, nail-trimming, etc., a restraining chute or small corral is necessary. Portable chutes designed for llamas and alpacas are commercially available or can be owner-built using wooden posts and two fence poles for each side. It may also be beneficial to have holding pens or small pastures so that the animals can be held temporarily without being confined in a small space (Goldsmith, 1996).
Take care when transporting llamas or alpacas during extreme weather. The vehicle must be well-ventilated, and animals should be checked for signs of heat stress or hypothermia at regular intervals. Llamas and alpacas should not be tied during transport, as this can result in serious injury or death (Camelid Community, 2005).
References
For References click here